SLX has announced the successful applicants for their 2018 bursary scheme, which sees the company supporting five students enrolled on production courses with £3000 of hire equipment as well as networking and development opportunities.

Spanning the UK, the students attend different institutions and are enrolled on a variety of technical production focussed courses. Third year students and graduating this year are Ashley Holdom (Rose Bruford) and Ryan Searle (Bristol Old Vic) and the 2nd year students receiving the bursary are Alex Silvester (University of Bolton – Backstage Academy), Georgia Wren – LIPA and Ben Linwood (Guildford School of Acting). As well as receiving the £3000 bursary to support a project of the student’s choosing, the five applicants were also welcomed into the SLX Avonmouth, spending two full days in May with the SLX team. This experience allowed the students to attend a number of talks and workshops, organised by SLX and hosted by a number of other professionals. These covered topics such as the world of freelancing, audio and video training, and networking training.

Ruari Cormack says: “We’re delighted to give these young people, who really are the future of the industry, that extra helping hand as they embark on their careers in the industry. These five were picked as they impressed Katy and I with the clarity of their ideas, tenacity and willingness to put themselves in new situations. It’s actually quite a small world in our industry so giving them the opportunity to network with us, the individuals and companies we bring in to host training and talks and importantly each other, should provide them with a valuable head start – not to mention a great opportunity to use £3000 worth of some of the best equipment.”

Ryan Searle, student at the Bristol Old Vic,  explained what he would be using his £3000 for, stating: “I’ve got a tour going out across the west country with the theatre school, so I’m able to take the opportunity to hire in and use equipment for that tour that I wouldn’t have been able to use otherwise. It’s exciting because it’s not just going to be me that benefits from the better equipment but everyone involved in tour.”

LIPA student Georgia Wren also explained what she’s got from the experience broadly: “In this industry it can be hard to get your foot in the door, but this opportunity to network and take part in the talks and training mean we’re getting a much better idea of what its actually like to work in the industry, and hopefully we’ll have our foot firmly in the door after this.”

Ben Linwood, of the Guildford School of Acting, summarises his experience, stating: “If it hadn’t have been for the last two days, we wouldn’t have met each other at this stage in our careers and that has been a real highlight as it’s important to have lots of connections. We also wouldn’t have had the opportunity to understand SLX as a business more fully as well as getting to know the whole team who have welcomed us in like family.”

SLX will continue to work with the students providing mentoring and further networking opportunities, as well as supplying their £3000 worth of hire equipment. 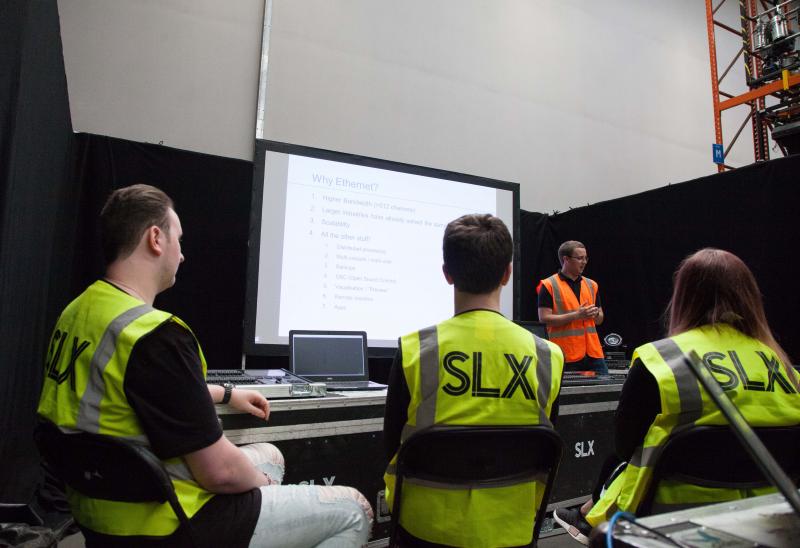 We are the proud winners of the 2022 TPi Green Award